Dr. Lianping Ti is hoping to increase access to treatment and improve the lives of people living with Hepatitis C.

Hepatitis C virus is often called a “silent killer.” It can go unnoticed for years – even decades – and by the time symptoms emerge, serious liver damage has often already occurred. At least 44 per cent of infected individuals in Canada don’t even know they have it.

More than 70,000 British Columbians are infected with this blood-borne virus, the majority of them likely exposed through blood transfusions or unsafe medical practices. It sounds like bad news, but there is plenty to be hopeful about.

The Treatment as Prevention model, which was pioneered at the BC Centre for Excellence in HIV/AIDS at St. Paul’s Hospital and has helped curb the spread of HIV worldwide, is being examined as a strategy to eliminate Hepatitis C. And there is a new cure for Hepatitis C that is effective 95 per cent of the time. The oral medication, known as direct-acting antiviral therapy, can work in as little as eight to 12 weeks.

In March 2018, the provincial government announced that all British Columbians living with chronic Hepatitis C will now have access to this treatment, regardless of the severity of their illness. The province also announced it would add a new chronic Hepatitis C drug to the PharmaCare program. Commonly known as Vosevi, the medication received a positive recommendation from the national Common Drug Review in January. 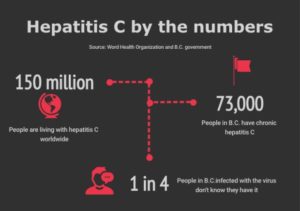 Once cured, there is no immunity to Hepatitis C, so understanding the risks of reinfection is a critical part of any effort to curb the spread of the virus. That’s why Dr. Lianping Ti, a Research Scientist at the BC-CfE, is leading a study to examine factors that affect Hepatitis C reinfection among at-risk populations. The Per-SVR study (PrEseRvation of Sustained Virologic Response – pronounced “persevere”) hopes to provide evidence to increase access to treatment and improve the lives of people living with Hepatitis C.

This first-of-its-kind system tells the story of Canada’s continuing battle with HIV.…

BC is leading the way in the global mission to eliminate HIV/AIDS.…